Stuart has been a police officer with Victoria Police, Australia, for 30 years. He is currently Commander of the Safer Communities and Crime Prevention division. Prior to this, he was the Superintendent at North West Metro Division 2 responsible for frontline service delivery to a population of 500,000. Stuart has led significant reform in the way local police respond to family violence and formed a number of harm reduction partnerships with local drug and alcohol services. He has also worked in a number of investigative areas including organised crime, counter terrorism and homicide.

Stuart holds a Masters of Business from the University of Newcastle and a Bachelor of Policing (Investigations) from Charles Sturt University.  He is a Rotary Peace Fellow having graduated from the Chulalongkorn University program in 2013. In 2015 Stuart participated in The University of Melbourne’s Law Enforcement and Public Health professional devolvement program. In 2017 Stuart was awarded the Australian Police Medal for distinguished service to law enforcement.

Stuart lives in the western suburbs of Melbourne with wife Milka, and children, Aleksandar and Natasha. 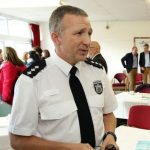